Introduction of the Spiral gun

Multi-pulse stimulation perforator is a collection of compound perforating and

sequence during perforation, which makes the perforation channel extended, expanded

to old well with heavypollution, this technology will help reduce near wellbore damage,

detonating cord and other parts from underground impact caused by high-pressure,

acid and alkali, operating shocks and vibrations and other factors. 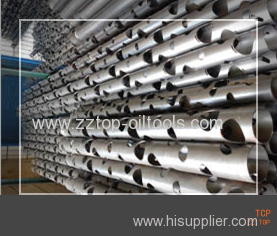